Tonight, we feature organizing at the state and local level.

Tonight, we’re looking at movement building and legislative change that is mounting in the new year. But if you take a bird’s-eye view, we’ll see that the repression has been year’s in the making. Whether we’re talking about the increase in higher education tuition, the dramatically increasing rents throughout California, or the forced displacements of communities there has been resistance through people powered solutions. 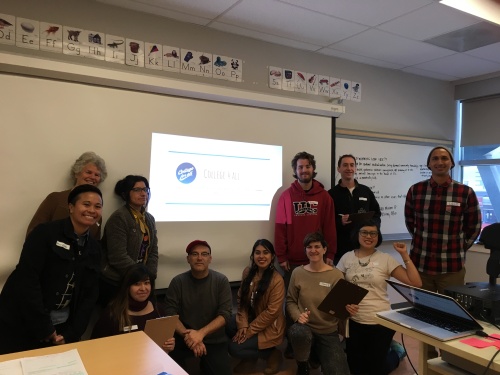 The first to join us is Celi Tamayo-Li. Born and raised in SF, Celi is the field organizer at San Francisco Rising where they’re focus is on “youth” which is defined as up to 30 years old. Celi taught history at Hilltop High, SF’s school for teen parents, and was the campaign manager for Vote 16 (a measure to lower the voting age to 16 in SF), which only lost by 2 percent. Celi talks about SF Rising’s College 4 All campaign.

Our next segment is hope for housing in the new year with an effort to repeal the Costa Hawkins Act. Our guest is Deepa Varma, the executive director of the San Francisco Tenants Union. Deepa has worked as an organizer, litigator and activist on social justice issues including women’s rights, public benefits, criminal justice reform and immigration. She was a tenants rights attorney in New York and at San Francisco’s Eviction Defense Collaborative. She helped to train a new generation of eviction defense lawyers in San Francisco to enforce the tenant protections we have in the city, and to provide last minute litigation support for tenants in housing court.

YOHANA getting down! Photo by Anth Bongco.

Finally, we we are joined by artist Colin Kimzey and Claire Amable, the youth health coordinator at SOMCAN or the South of Market Community Action Network. Colin and SOMCAN were awarded $3,000 from Southern Exposure’s Alternative Exposure grant to “invigorate and transform the San Francisco Bay Area arts community”. The project is called Barangay Broadside and it pays for silk screen workshops at the South of Market Community Action Network. 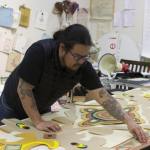 For a quick recap of what we featured on tonight’s show: Legions of Boom, the discussion on Filipino American mobile DJs and the immersive theater experience is on Friday, May 13 for the panel discussion, and Saturday, May 14 for the immersive theater experience at 8 p.m. both nights at Bindlestiff Studio in San Francisco.  AYPAL’s May Arts Festival is on Saturday, May 14 from 11 to 4 at San Antonio Park in Oakland.  and the Recology exhibition dates are Friday, May 20 from 5 to 9 p.m., Saturday the 21st from 1 to 3, and Tuesday, May 24 from 5 to 7 p.m. at 401 Tunnel Avenue in San Francisco.

You may remember that on April 6, APEX covered a story about a Bay Area production of the Mikado where it was feared performers would be in Yellow Face. That controversy led to an important community discussion on equitable representation in the arts. It takes place on Monday May 9 from 6:30 to 8:30 at the Yerba Buena Center for the Arts. Arts activist Marc Bamuthi Joseph will be moderating a conversation on this topic with the members of the Ferocious Lotus Theater.

May 10th is Asian American Mental Health Day. Asian & Pacific Islanders make up one of the fastest growing ethnic communities in the United States, yet they have the lowest rates of utilization of mental health services among ethnic populations. To destigmatize mental health issues, Kearny Street Workshop has teamed up with the Richmond Area Multi-Services Inc. to present “Frames of Mind,” a seven-week photography workshop. An exhibition of their work focused on mental health led by documentarian R.J. Lozada that will be on display at the I-Hotel in Manilatown on May 10 to May 12.

As part of the National Queer Asian Pacific Islander Alliance’s #RedefineSecurity week of action, a broad coalition of API community organizations are coming together to discuss what safety looks like for queer and trans API folks, particularly in the context of incarceration, immigration and racial profiling. This conversation will take place at Excelsior Works on May 15 from 3:30 to 5:30 with our friends at AACRE: API Equality of Northern California, the Alliance of South Asians Taking Action, Asian Prisoners Support Committee, and ASPIRE

And closing out May, spoken word artist and author Jason Bayani will be performing pieces drawing on stories from the fourth wave of Pilipino immigrants at Bindlestiff Studios on May 27 and 28.

We share with you Yuri’s thoughts on African and Asian solidarity across the globe, her intimate recollection of Malcolm X’s murder, and we also hear more from the youth and the up and coming generations that she has inspired.

Tune in tonight for:

Last Thursday in San Francisco, undocumented immigrants and their supporters sat down in front of a deportation bus.  It was part of an action to shut down Immigrations and Customs Enforcement.  They managed to delay the bus for several hours, and 26 people were arrested.  Apex Contributor Marie Choi talks with May Liang, an organizer with Asian Students Promoting Immigrant Rights Through Education (ASPIRE).

WBAI’s Asia Pacific Forum covered the exciting and historic community-led victories against Stop & Frisk and other racial profiling and oppressive practices by the New York PD.

You’ll hear the voices of Andrea Ritchie of Streetwise & Safe, Jennifer Ching of Queens Legal Services and Lynly Egyes of the Sex Workers Project of the Urban Justice Center – all based in New York.   Apex Contributor Ellen Choy brought the story to Apex.  It was produced by Asia Pacific Forum’s Michelle Chen.

Finally, should residents be able to call the shots about how their tax dollars are spent?  In Oakland, the Community Democracy Project is collecting signatures for a ballot measure that would do just that.  Modeled on the democratic budgeting practices of Puerto Allegre, Brazil and Medellin, Colombia.

We talk with Jiwon Chung and Alexa Chua to learn more about how democratic budgeting would work.

On this weeks show:

As a thank you gift for becoming a member of KPFA (amount TBD), you’ll be receiving Thanks and Have Fun Running the Country: Kids’ Letters to President Obama. 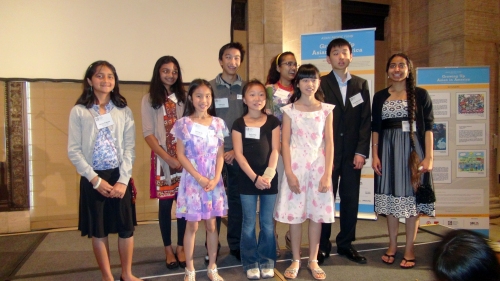 This week we hear some amazing youth voices and from youth educators.

We’ll be sharing with you some of the winning essays from the Asian Pacific Fund’s Growing Up Asian in America essay contest.

In the studio, Rod Daus-Magbual, Associate Director of Curriculum at Pin@y Educational Partnerships (PEP) in the studio with us, and for the hour, we’ll be discussing youth and education:  From the work that PEP does to inspire their students, and be inspired by them, to more ethnic studies courses in high schools, to building the next generation of teachers–the terrain is vast and there’s a lot to cover.

7/5/12 Fighting Back the Big Box, Politicizing Desi Youth, and Art of Hustle 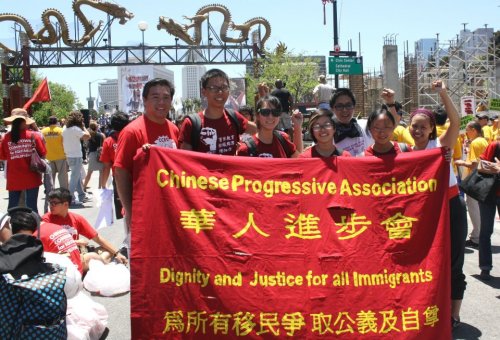 This week on APEX Express, we talk about politicizing Desi youth, fighting back against WalMart in L.A.’s Chinatown, and learning from The Art of Hustle. Tune in!

This Friday, Asian Pacific Islander Cultural Center and Asian Improv present PULL. Performing artist/actor/writer Traci Kato-Kiriyama and actor/aerial artist Kennedy Kabasares use monologues, recorded interviews, and static trapeze as elements to tell the story of a young woman’s relationship with her mother, and how they deal with the death of her father. The show starts at 8 p.m. at COUNTERpulse in San Francisco.

On Saturday, IcTus Gallery in San Francisco presents a photo installation by Bay Area photographer Pak Han. The opening reception is from 6 -10 p.m. and features a live performance by percussionist Dohee Lee.

Later on Saturday, Pinoispop and Bindlestiff Studio present Seemingly Random Bleeps, a music showcase featuring Secret Sidewalk, Apple Orchard, The Dualies, The Skyflakes, and Shadow is My Friend. Tickets are $10 and the show starts at 8 p.m. at Bindlestiff Studio. 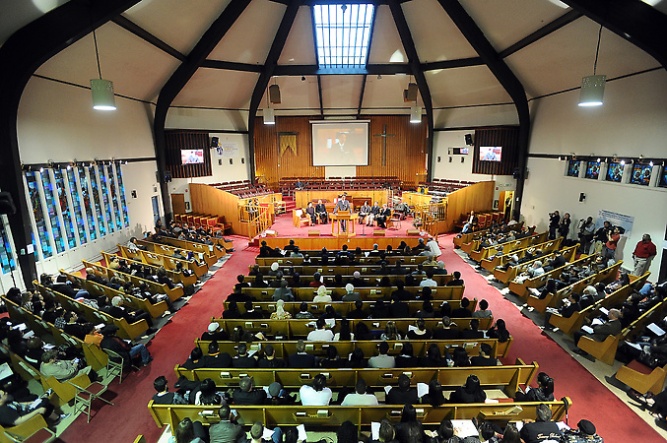 The recent events surrounding One Goh, and the Oikos Tragedy still leave many questions unanswered. Contributors Marie Choi and R.J. Lozada attend a vigil at the Allen Temple Baptist Church on April 3.  The two report back on what happened at the vigil, and what’s been happening.

Contributor Marie Choi interviews Kosal Khiev, Poet, Tattoo Artist, and Survivor of the U.S. Prison System. Kosal is an artist with Studio Revolt and is currently living in exile in Cambodia. 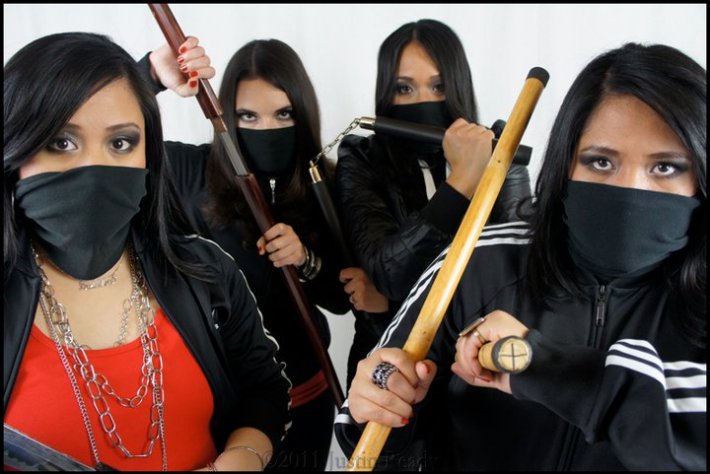 Buffalo’ed retells the story of the Buffalo Soldiers, descendants of American slaves, who were stationed in the Philippines at the turn of the 20th Century, during both the Spanish-American and Philippine-American Wars. The military presence of the United States Army’s Buffalo Soldiers’ during the Philippine occupation is a little-known thread in the fabric of American history. It is an American story told through dialogue and movement.   Click here for more details…

This is the DMC’s classic solo showcase style DJ battle:

It’s back-to-school season for most Bay Area students – so tonight we hear about a fierce campaign to transform the Oakland school district!  We have a full-length interview with the incredible voices of AYPAL youth leaders!  9 API youth organizers, making up the AYPAL Campaign Organizing Team, joined us in the studio to talk about their current campaign to fight to include Ethnic Studies in the Oakland Unified School District.  They speak on their work, how they got involved, and how they’re already winning successes on a completely youth-led campaign.  Also, their AYPAL adult coordinator – Armael Malinis – joins us live to give us the latest updates and tell us how to get involved.  Plus, some exciting musical selections.