In the second half of the show, we turn our attention to the South Asian island country of Sri Lanka. Known as a global tourist destination, the country is also neck deep in deep political crisis, which took a new turn of events in October 2018 when the president Maithripala Sirisena unilaterally displaced the sitting Prime Minister Ranil Wickremasinge with MahinDa Rajapaksa, himself former President who presided over the end of Sri Lanka’s bloody 25-year civil war and is accused of serious human rights abuses during his rule from 2005 to 2015. What does this mean for a country that is still reeling recovering from the civil war? How are feminists and civil society grappling with the ongoing political and socio economic crisis plaguing the country? Listenup next to a discussion I had with noted Sri Lankan feminist activist Shreen Saroor.

Kashmiri film maker Danish Renzu on his film Half Widow; and Nityanand Jayaraman on the ongoing environmental crisis that has been festering in the small south Indian town of #Thoothukudi that led to 10 peacefully protesting civilians being killed by the state.

On Monday, hundreds in San Francisco heeded the international Call to Action against Trump’s visit to the Philippines and Asia Pacific region. APEX’s Nonogirl brought back some tape from the rally including speeches by Jessica Antonio from BAYAN USA and Leslie Tran from VietUnity. 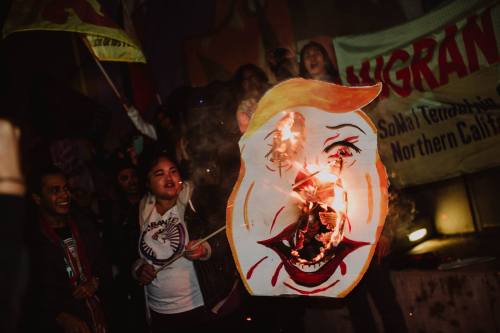 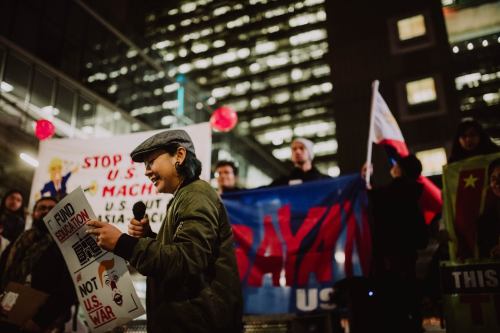 ACTION ITEMS:
1. DONATE to BAYAN’s People’s Caravan and Protest actions to confront Trump at Clark Airbase. They will need to buy tents, sleeping bags, etc. as they camp-out along the 2-day caravan. You can Venmo @BAYANUSA or donate to BAYAN USA on www.paypal.com
2. JOIN the Resist US-Led War Movement by signing on to the Manifesto:http://www.resistusledwarmovement.com/

Tonight, we chat in studio with community leader Alvina Wong, about a coalition working to prevent the Oakland A’s from building a new ballpark next to Oakland Chinatown. And we hear from the survivors of the Gwangju Uprising and how this movement changed the course of Korean history in a piece by APEX producer Marie Choi. Peppered throughout the show, we hear from Tony Robles, an SF native and housing activist, who shares poems from his new book, Fingerprints of a Hunger Strike. 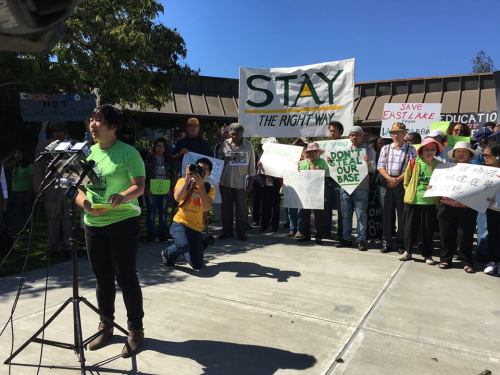 Alvina Wong from APEN and the Stay the Right Way coalition speak out against the proposed Oakland A’s stadium in Chinatown.

Joining us in studio is Oakland Organizing Director Alvina Wong from Asian Pacific Environmental Network, who is working to stop the proposed development of a new Oakland A’s stadium near Oakland Chinatown and Laney College. Alvina and the Stay the Right Way coalition organized and delivered a petition with 1,700 signatures opposing the development.

We also play Marie Choi’s powerful piece about the Gwangju Uprising, a pro-democracy uprising against the U.S. imposed military dictatorship in South Korea. This piece was produced by Marie Choi for Making Contact.

And we have poetry by Tony Robles. In 2016, a group of five San Francisco activists held a hunger strike to protest the racist killings committed by SFPD earlier that year. The 16-day strike inspired poet and housing activist Tony Robles to write “Fingerprints of a Hunger Strike.” Fingerprints is a collection of poems about displacement, police brutality, and resistance in the city that he loves.

November 10th – The Center for Political Education, Women Cross DMZ, HOBAK, and Catalyst Project are hosting a panel on Averting US War on North Korea: What Progressive Must Know and Do. It’ll be 7-9PM at First Congregational Church of Oakland.

November 18th – Greg Watanabe will be telling the story of Gordon Hirabayashi and his impact on civil rights through a dramatic concert reading of “Hold These Truths” by playwright Jeanne Sakata. Tickets are available at fortmason.org and proceeds will go to San Francisco JACL’s Arts and Activism program.

9/1/16 We Are Against the Wall, Goodbye to La Plebe, and Resistance to THAAD

Tonight we welcome a new voice to APEX, Sierra Lee who daylights at the Center for Asian American Media. 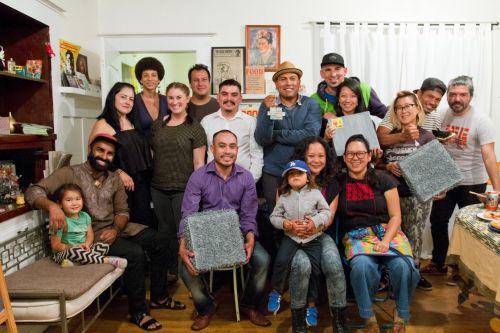 La Plebe’s final shows are this Friday in Watsonville, Saturday at Gilman, October 14 at Bottom of the Hill, and October 15 at El Rio.

And next Thursday, don’t miss out! Mass Bass is playing at 12:30 at the Yerba Buena Gardens Festival! You thought they broke up, you thought that frontman Kiwi left the country! Be there on August 8. It may be your last chance to catch this seven-piece radical hip-hop soul collective from Oakland.

Next Thursday after 5 p.m. is “Kristina Night” at the Asian Art Museum! Comedian Kristina Wong joins filmmaker Jeff Adachi, performer Khmera Rouge, and other local artists and museum docents to reinterpret famous pieces of performance art from Yoko Ono, Shia Lebeouf and more. You won’t want to miss this hilarious, one-night only takeover.

The Spirit of Bandung: Third World Unity 60 Years On 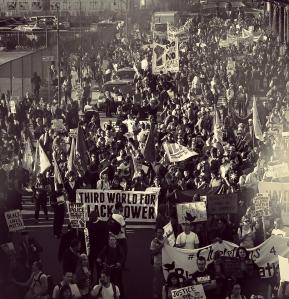 In celebration and reflection on the 60th anniversary of the Bandung Conference the International League of Peoples’ Struggle, Third World Resistance, and The Center for Political Education are holding an event this Sunday called The Spirit of Bandung: Third World Unity 60 Years On. Robynn Takayama talked with CPE coordinator Alexa Zapanta  to learn more about  how the event will explore the historical significance of the conference and its relevance for our current struggles.

Today is April 30th, a very significant date to the Vietnamese people. It was 40 years ago today that the U.S. imperialist army was forced out of Viet Nam, ending what was known in the U.S. as the “Viet Nam War” and what was known in Viet Nam as the “American War,” a war that marked a long history of anti-colonial struggle in the country and that killed millions in Viet Nam, Laos, and Cambodia. 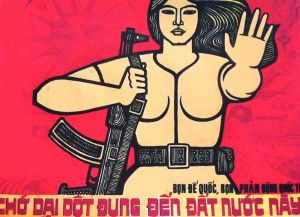 Tonight’s APEX Express is dedicated to commemorating the legacy of the Viet Nam War on the Vietnamese people – both in Viet Nam and in the Vietnamese diaspora here in the U.S. A complicated history in a divided country, we want to hear the voices of those impacted by the war, as well as those who resisted that war 40-50 years ago.

We will hear a personal commentary produced by APEX Contributor Yvonne Tran, pieced together out of conversations she had with her mother. Then, we have three guests live in the studio to talk more about the impacts of the war and to preview a community intergenerational teach-in happening in Oakland this Saturday called “Spirit of Viet Nam Is Stronger Than U.S. Bombs.” Our speakers include:

And we’ll play some awesome songs and historic speeches that came out in the ’60s and ’70s during the war!

Tonight’s show is also in tribute to the thousands who lost their lives, and are still recovering, from the devastating earthquake in Nepal.

Below is a list of women-led organizations that have asked for support for their long-term responses to the crisis. They are already mobilizing their communities to take action and welcome donations at this time.

Brandon Lee, his daughter, Jesse, and his wife, Bernice.

Tonight’s edition we revisit the R.J. Lozada’s trip to the Philippines and bring you an interview with Brandon Lee, a human rights worker who moved from the United States to the Philippines to be with his family and serve the people. Lee is currently being threatened by authorities in the Philippines, and we’ll talk to some of his friends and fellow organizers about how people can help protect Brandon and other activists.

We bring you thoughts from the vigil for slain Bangladeshi blogger Avijit Roy.

To conclude, we’ll bring you a lively discussion by Preeti Shekar Mangala with noted journalist and author Sandip Roy on his debut novel that has already been making waves, Don’t Let Him Know.

Listen to an expanded cut of Sandip Roy’s Interview:

KRISANTHA SRI BHAGGIYADATTA plays on the links between history, Sri Lanka and the Americas, Africa and Asia. He was a broadcaster of the radio show Bourgeois Blues, Bourgeois News on Toronto’s CKLN (now banned). He is presently compiling: A Very Personal English History of the World. His books of poetry include: Transfixed in Twilight (2015), Cheqpoint in Heaven (2005), Aay Wha’ Kinda Indian Arr U? (1997, 2015), The 52nd State of Amnesia (1992), The Only Minority is the Bourgeoisie (1985), and Domestic Bliss (1981). He has read poetry in Colombo, Kandy, Beijing, Port of Spain, New York, San Francisco, London, and Toronto.

On Memory and Place: Writing Workshop with Manilatown’s Tony Robles

Join Kearny Street Workshop for a 4-part writing workshop exploring the sacred places where our poetical sense of community blossoms and grows. Guided by Tony Robles, participants will write about their sense of home, sense of self, and sense of place. We will draw inspiration from the works of Asian Pacific American literary elders such as Jeff Tagami, Shirley Ancheta, Al Robles, and others who explore the heart of Manilatown, the heart in exile, and what it means to come home. 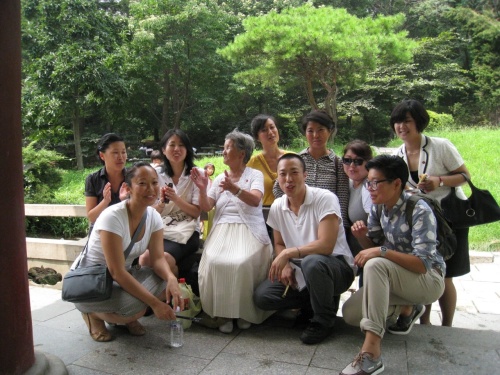 On tonight’s show, we travel to the Democratic Peoples Republic of Korea — better known here in the U.S. as North Korea.  Ellen Choy, Caitlin Kee, and Steph Lee visited the DPRK last summer as part of the Korea Exposure and Education Program (KEEP), an annual delegation of Korean American activists to both sides of Korea, one year to the north and the other to the south, to build person-to-person understanding. 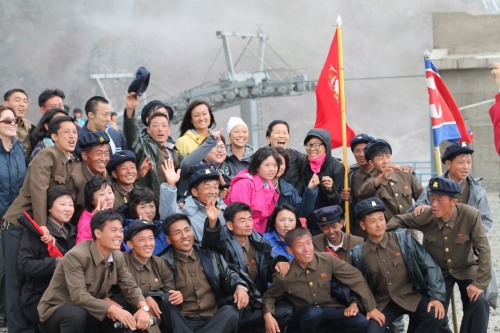 We’ll feature an interview with Ellen, Caitlin, and Steph — as well as clips from a short documentary that was produced by JT Takagi, Hye-Jung Park and Chris Kang and Third World Newsreel.

Hosted and produced by Marie Choi.  Marie is also part of HOBAK.