Tonight, we talk about the significance and practice of direct action from Asian Americans who believe that this tactic is crucial to our movement. We look at the history of Asian Americans doing direct action, notable examples, and most importantly, how direct action is being used by Asian Americans today.
Tonight’s show will feature brilliance and wisdom from Sabiha Basrai from Alliance of South Asians Taking Action and Sarah Lee from Asians 4 Black Lives. We have special guest hosts from API Equality – Northern California, Spam and Spam and the Cynthisizer.

Our first guest is Sabiha Basrai from Alliance of South Asians Taking Action, also known as ASATA. ASTA is a San Francisco Bay Area all-volunteer group working to educate, organize, and empower the Bay Area South Asian communities to end violence, oppression, racism and exploitation within and against our diverse communities.

We’re very excited to have Sabiha from ASATA and Sarah from Asians 4 Black Lives here because today, we’re just going to have a conversation about direct action as Asian Americans in the movement.

Call to Action for Ny Nourn

Greetings, my name is Danny Thongsy I am a Yuri Kochiyama Fellow at Asian Americans Advancing Justice/Asian Law Caucus. I am deeply inspired by Ny Nourn. Her strength and resilience speaks to the spirit she carried which defied so many odds and obstacles. The trajectory of her life – migration-school-prison-detention/deportation pipeline – disclosed the results of our nation’s militarism/capitalism and its failure to help immigrants and disadvantaged members within our community. Her life has raised so much awareness regarding this and domestic violence issue.

I can empathize with Ny, being a child refugee of parents who escaped war and the Khmer Rouge genocide only to resettled in an impoverished setting, and I only imagine how difficult it truly was for her and her family; in addition, to the trauma of war she and her family carried and the challenges of acculturation. Also, as a young lady she was shackled in an abusive relationship with a man who is older than she is and to escape seems detrimental. As a results of this toxic relationship  she was later accused by our failing criminal justice system for a crime her abuser committed and then she was branded with a prison number and given a life sentence.

However, regardless of her circumstance, after a decade and numerous years of being warehoused and separated from her family and her community, she persevered and attained her freedom but only to face, once again, a threat of being  separated from her family and her community through deportation. The question is: when is enough enough especially for a domestic violence survivor who served an unjust sentence for a crime her abuser committed and all she wants is to forgive him, bring healing to her community, and be reunited with her family.

Once again as she perseveres through this challenge, we at the Asian Law Caucus and other organizations and community groups are supporting her by advocating for her release.

On our bi-monthly South Asia spotlight, we highlight two critical issues – the #Notinmyname campaign that has gone viral in India in the aftermath of a series of brutal lynchings and murders of Muslims and Dalit communities in India. And we have an update from closer home here in California – the #NehaRastogi case and the pernicious issue of #domesticviolence and how it specifically impacts of immigrant women of color.

#NehaRastogi solidarity protests across many US cities

To listen to the full interview discussion with Zakia Afrin from Maitri (second half of the show), click on this link.

Tonight APEX Express has a very special presentation of next installment of Crossing East, the Peabody-awarded radio documentary series about Asian immigration to the United States. In this 10th anniversary since the original air date, Executive Producer Dmae Roberts, with the support of APEXer Robynn Takayama and Alan Monticello, created Crossing East: Relations.

Relations unravels the turbulent racial divisions in America. This isn’t a story about Black and White tensions, but about how marginalized groups have historically been pitted against each other. The documentary features a number of Bay Area voices including Malkia Cyril, executive director of Center for Media Justice; Anirvan Chatterjee, curator of the Berkeley South Asian Radical History Walking Tour; and Ellen Choy with Movement Strategy Center.

Together, they unpack systemic racism and describe a rich history of solidarity between Asian and Asian Americans and African Americans, including the Indian Independence Movement, Civil Rights Movement, and Black Lives Matter.

In 2015, the #OscarsSoWhite hashtag swept through social media around the paltry amount of roles for actors of color on the screen, but behind the scene is no different. Mina Morita is artistic director for Crowded Fire, a theater company in San Francisco. She’s in a creative leadership position in a field with very few directors of color and even fewer women directors.

Sisters Matsumoto focuses on three sisters who return to their farm in Stockton, California after two years in a World War 2 internment camp. Written before the Patriot Act, Special Registration, or this new Muslim Ban, the play takes on a renewed urgency as the characters bring to life the real life aftermath of racist scapegoating.

Before delving into a discussion about the play, guest producer Robynn Takayama asked director Mina Morita about her home base with San Francisco-based theater company, Crowded Fire.

The play is on view at Center REPertory Company in Walnut Creek from now through April 29. Visit centerrep.org for tickets. And to follow Mina Morita’s work as artistic director of Crowded Fire, visit crowdedfire.org.

We’ll be in conversation with author Thi Bui about her debut graphic novel, “The Best We Could Do,” which offers a haunting and intimate portrayal of one family’s journey from war torn Vietnam. Then, we’ll hear from the lead petitioner seeking justice for the Shibayama brothers, who continue to demand that the US government be accountable for its ongoing failure to provide redress for war crimes perpetrated against them as children during World War II. We will round out the hour in conversation with contributors of the newly released South Asian American Issue released by the Chicago Quarterly, guest edited by Moazzam Sheikh, who explains that “The new South Asian American writer is a wild beast.” We’ll delve into that wildness. We have all that and more, so tune it.

More information about the Campaign for Justice for Shibayama Brothers case here.

Information about the petition in support of the Shibayama Brothers here. 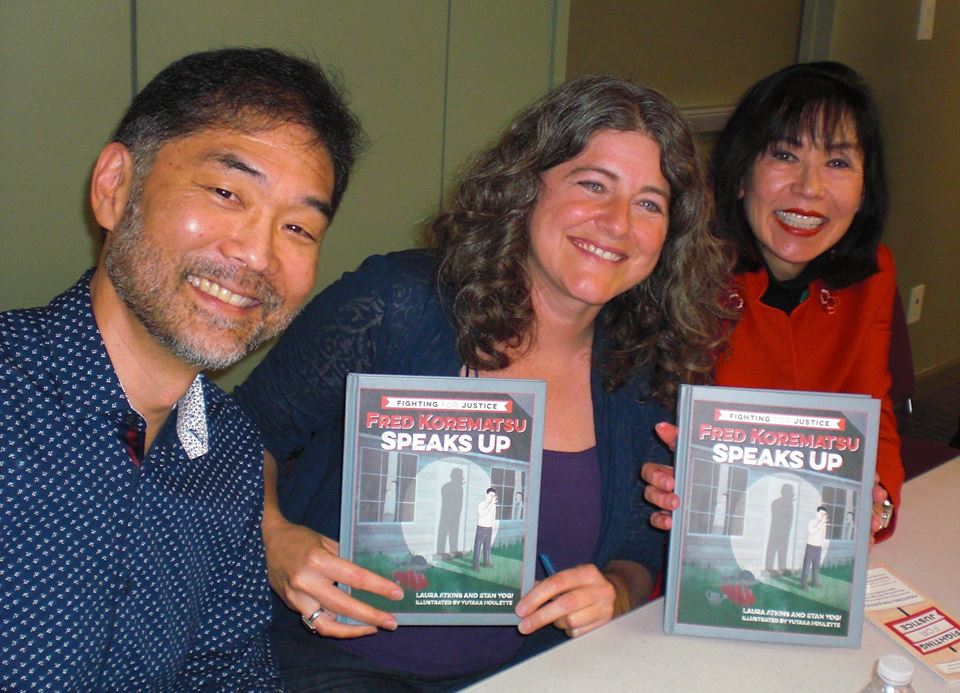 Tonight, we reflect on the 75th anniversary of Executive Order 9066. Issued by President Franklin Delano Roosevelt, this order forcibly removed 110,000 people of Japanese descent from the west coast to inland detention centers. END_OF_DOCUMENT_TOKEN_TO_BE_REPLACED

Everyone is welcome here poster up at Mrs. Dalloway’s Bookstore. Photo by Anirvan Chatterjee.

Guest contributor Oliver Saria talks with Anirvan Chatterjee with the Berkeley South Asian Radical History Walking Tour. Anirvan published an op-ed entitled “Post-election hate in Berkeley: 14 troubling stories and 5 ways to respond.” Their discussion brings us hope as we wind down 2016 and prepare for the new year.

We also hear from Japanese Americans who were incarcerated during World War II. In addition to the forced relocation away from the west coast, we hear from the draft resisters who rose up from within the camps.

We sprinkle holiday music throughout the show. Songs include a flashback to 2014 when the Colorful Mamas of the 99% went caroling with their children for love and liberation in Oakland for Black Lives Matter. We also share holiday tunes from Digital Crafts Night and Largesse.