Download the audio by clicking here.
Spirituality is an important source of both resistance and renewal. However, Asian and Asian Americans often compartmentalize themselves when engaging in spirituality especially within religious communities in the U.S. Gender, sexuality, and cultural histories are often erased to find belonging in spiritual communities. As a result, spirituality can be hard to access for Asian and Asian Americans communities when our full selves are not involved. We will be exploring the factors that contribute to these spiritual barriers and what our communities are doing to find places of healing and resistance.

Tomorrow from 9AM-5PM, Bay Resistance will be phone banking to Defend Our Healthcare at Senior & Disability Action, 1360 Mission St. Suite 400 in San Francisco. Please RSVP on their website.

And save the date! On August 12, Network on Religion and Justice host their “Rise Up” day-long conference and community gathering focused on healing and resistance. “Like” NRJ’s facebook group to stay updated for registration for this conference.

10/13/16 Labor Strikes in S. Korea, Network on Religion and Justice, and Illustoria 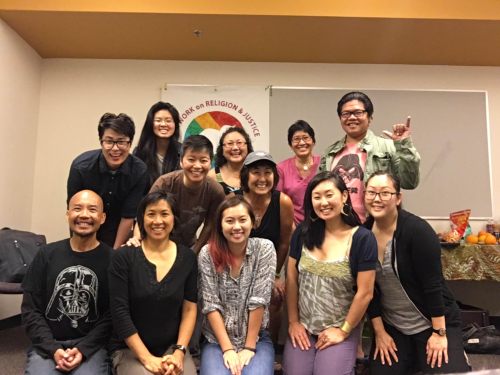 Members of NRJ participating in the Digital Storytelling Project

Tonight is the opening night of Bindlestiff Studio’s Stories High! This culmination of their annual page to stage workshop series features six one-act plays about bike lane politics, popping the question, and urban legends. Performed at the country’s longest running, Filipino American performing art space, you don’t want to miss these performances by, for, and about our communities. Stories High runs for three weeks, so get your tickets now.

On Sunday, the Amandla Collective at KPFA hosts 24 hours of interviews, music, features, speeches, documentaries and more, celebrating the legacy and 50th anniversary of the black panther party for self defense, it’s relevance and necessity then and now. The Amandla Collective is comprised of Black programmers and engineers at KPFA who produce African Diaspora–Black–African-American content/shows. Make sure you tune in! 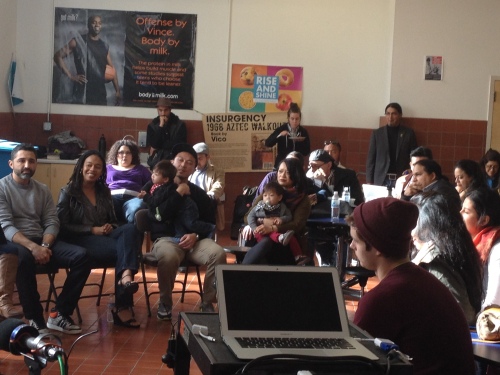 We also learn what it means to be a reconciling church, or a church that welcomes all sexual orientations and gender identities. We talk with Lauren Quock with the Network on Religion and Justice about the upcoming Reconciling Sunday at Wesley United Methodist Church in San Jose. 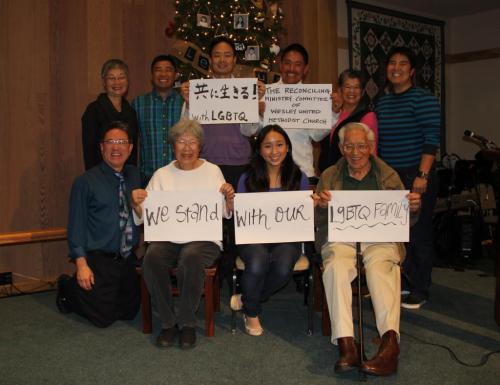 12/25/14 Lessons and Carols for Advent and Christmas 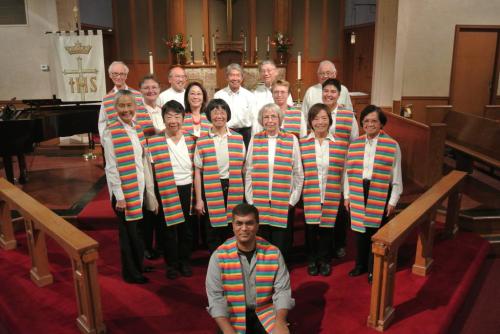 The combined choirs of The Episcopal Church of the Incarnation and the Network on Religion and Justice’s 88 Keys.

For Christmas evening, APEX brings you a very special show featuring the Network on Religion and Justice for Asian Pacific Islander LGBTQ People. We’ll hear from NRJ’s coordinator, Lauren Quock, about the formation of NRJ, and from Ann Lew who is part of NRJ’s choir, 88 Keys.

Our show features recording of Lessons and Carols for Advent & Christmas, a concert of the combined choirs of The Episcopal Church of the Incarnation and 88 Keys! Lessons and Carols for Advent & Christmas interweaves the Biblical stories from the fall, the prophecy of Jesus’ birth, and the birth of Jesus with carols — ancient, traditional and contemporary featuring choir anthems as well as congregational carols.

We also hope to have a few carols from  Caroling for Love and Liberation, an all-ages action held on Tuesday with mashed up carols, from the solemn to the silly, for Black liberation.

12/19/2013 #NotYourAsianSidekick, Section 377, NEFFCON and the Peace Movement in the Philippines

Those of you on the Twitterverse may have seen a surge of tweets labeled #NotYourAsianSidekick. What is it? What does it mean? In the studio to talk about the twitter movement and it’s translations to on the ground organizing is Cayden Mak, New Media Director of 18 Million Rising. 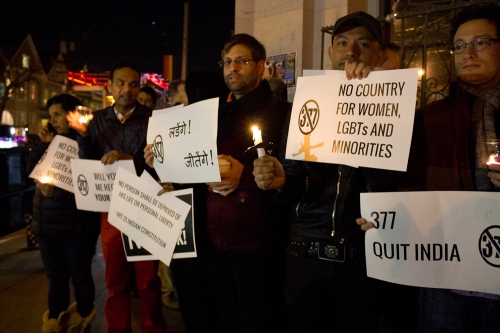 Section 377 of the Indian Penal Code dates back to 1861, introduced during British rule of India, criminalizing sexual activities “against the order of nature.”

In 2009, Section 377 was struck down by the High Court of Delhi. It was declared unconstitutional with respect to sex between consenting adults.

However, the judgment was overturned last week, by the Supreme Court of India, which found that Section 377 is a Parliamentary matter, not a judicial one.

To help us understand the history, the context, and the work that begins again to repeal 377, R.J. Lozada brings in Mohammed Shaik Hussain Ali, Secretary, Trikone and Editor of Trikone Magazine. Trikone is one of the oldest South Asian LGBTQ organizations in the world, based in San Francisco, CA.

NEFFCON Nor-Cal gathers to urge the Philippine government to engage in the peace process. Photo by Megumi Yoshida.

The National Ecumenical Forum for Filipino Concerns – North California Chapter, or NEFFCON Nor-Cal, is composed of several churches in the Northern California region.

NEFFCON-NorCal Chapter is a Forum for continuing dialogue of life leading to a shared theological perspective, common decision and coordinated courses of action on issues and concerns affecting the Filipino people in the Philippines and the Filipinos and Fil-Americans in the US. It is Ecumenical in the pristine sense of the word: “to take care of the inhabited earth” together.

Kathryn Poethig, member of NEFFCON’s organizing  committee, and longtime peace-worker in Southeast Asia, will be joining host, R.J. Lozada to talk about NEFFCON’s work, the church in the Philippines, and the long history towards peace in the Philippines.

On Friday, 12/20, 9:30 AM Please join an international day of action at the Consulate of India (540 Arguello Blvd., San Francisco)to support the domestic worker exploited by the Deputy Consul General of India. Devyani Khobragade was arrested for lying to the State Department in regards to the terms of employment listed on the visa for her nanny and housekeeper in New York. She claimed the worker would be paid $4500 a month and then only paid her $3.31 an hour. She also verbally abused her, confiscated her passport and told her she had no other options.

On Monday, August 20th, journalist Seth Rosenfeld released articles and a video alleging that longtime activist, Richard Aoki was a FBI informant. Since then, many circle within the Black Panther Party, and the Asian American community have been discussing the facts, and the implications of these allegations. We have an exclusive interview with activist and scholar Harvey Dong, close friend of Aoki, to add perspective to the diverse responses.

Ramadan is the ninth month of the Islamic calendar, and during that month, fasting is observed. Fasting is one of the Five Pillars of Islam (Kalima, Salat: Prayer, Zakat, and Hajj, or Pilgrimage being the other four).  Zahra Billoo of the Council on American-Islamic Relations shares what Ramadan is about and it’s significance this year.

We play an award-winning segment on a water struggle on Maui, produced by Robynn Takayama back in 2008. Why? Because last week, the Hawai’i Supreme Court gave a favorable ruling, so we’ll hear an update from Earthjustice Attorney Isaac Moriwake  about this recent victory.

Community Calendar
On Saturday August 25, 2012 from 1:30 to 5:00 pm, join the folks at the Manilatown Heritage Foundation located in San Francisco’s Chinatown, for DJ open turntables and Break Dancing workshop taught by Rob Nasty of Star Child La Rock. For all ages. Donations $5 to $10 sliding scale. https://www.facebook.com/events/274803989299981/

On Sunday, Sunday Streets returns to San Francisco’s Chinatown. From 11 a.m. to 4 p.m. walk, bike, and ride your big wheel(!) through the middle of the car-free streets.
http://www.sundaystreetssf.com/

7/29/10 The Sun Behind the Clouds: Tibet’s Struggle for Freedom

Photo taken from The Sun Behind the Clouds website

Tonight on Apex Express, we feature The Sun Behind the Clouds: Tibet’s Struggle for Freedom. Tibetan filmmaker, Tenzing Sonam, and his partner, Ritu Sarin, take a uniquely Tibetan perspective on the trials and tribulations of the Dalai Lama and his people as they continue their struggle for freedom in the face of determined suppression by one of the world’s biggest and most powerful nations. The filmmakers had intimate access to the Dalai Lama and followed him over the course of an eventful year, which included the 2008 protests in Tibet and the international, the Beijing Olympics, and the breakdown in talks between his representatives and the Chinese government.

It is also KPFA’s summer fund drive, call in your support for Apex Express and KPFA.

This week on Apex Express, Jonathan Leong and Pawan Dhillon from the Asian American Donor Program join us to talk about their outreach to local API communities around stem cell and marrow donation. They are organizing a Hip Hop for Hope dance contest which will take place at the Palace of Fine Arts. The application deadline is extended to March 31!

Also, we speak with musician Amber Field about her life’s journey as a Korean transracial adoptee, and her work as a sexual health educator in Peru.

Finally, The Center for Babaylan Studies joins us to talk about their upcoming conference, where spiritual healers, activists and culture bearers from the Philippines and the US will be gathering.