Next Goal Wins: Interview with Players on the American Samoa National Team 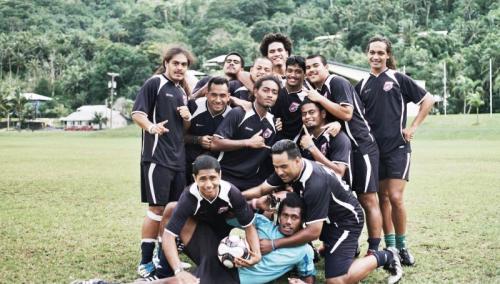 In 2001, the American Samoa soccer team suffered a record setting defeat to Australia, losing a brutal 31- 0. A decade after the humiliating defeat, the team remained at the bottom of the FIFA world ranking and have never won a competitive match. In an effort to improve their play and score at least ONE goal, the American Samoan team turned to the U.S. Soccer Federation to recruit coach Thomas Rongan who turn the team around with some surprising results on the field and in the record books.

Timmy Lu and Harjit Singh Gill, who run the website http://pickedlastsports.com, fan perspectives on sports and politics talk with members of the American Samoa soccer team who are featured in the documentary Next Goal Wins. On the phone in New York following the film’s world premiere at the Tribecca Film Festival, we have defender Jaiyah Saelua, and in Tacoma, Washington we have goalie Nicky Salapu.

The film is showing at the Roxie in San Francisco.

Tonight we talk with three very special guests who are leaving their comfort zone in a music hall or soccer field to be in a cinematic theater.

Indie rock powerhouse, Thao Nguyen, has captured audiences with her intricate guitar playing, tough yet vulnerable performances, and deep lyrics. Learn what she faced as an Asian American performer in the mostly white male sphere of indie rock, why she commits her time home from tour to volunteer with the California Coalition for Women Prisoners, and what she’s doing at the San Francisco International Film Festival.

We also excited to introduce guest contributors, Harjit Sing Gill and Timmy Lu with PickedLastSports.com, a blog about sports and politics. They talk with two players from the American Samoa national soccer team who are featured in the documentary Next Goal Wins. This is about a team that was at the bottom of the FIFA world rankings and lost every competitive game they have ever played. But the players have amazing heart and you’ll meet Jaiyah Saelua, the first transgendered player to play in a FIFA match and Nicky Salapu, a goalie who is respected by his teammates.

Community Calendar
In the spirit of activists Al Robles and Bill Sorro, the Manilatown Heritage Foundation invites you on Friday April 25th, at 6 p.m. to join poets and musicians as they speak out against eviction and displacement in San Francisco.

On Tuesday, April 29 at 8p.m. there’s the special program in the San Francisco International Film Festival featuring our guest tonight, Thao Nguyen. Reaching back into her musical catalog, Thao and her band The Get Down Stay Down will perform to an assortment of classic, complex and funny films from the silent era including Charlie Chaplin’s anarchic The Pawnshop, animation by Harry Smith, and classic newsreels.

And of course on May 1, there’s the International Workers Day Regional March. March with community members from across the Bay Area in the streets of Oakland! The opening rally is at 3:30 at Fruitvale BART. The march leaves at 4 p.m. and returns back to Fruitvale BART Plaza for a closing rally and celebration at 5:30.

Tagged Jaiya Saelua, Nicky Salapu, thao & the get down stay down