Voices from the Emergency DACA Rally in San Francisco, organized by Bay Resistance on the day Trump ended the program. You’ll hear from a young woman with ASPIRE (Asian Students Promoting Immigrant Rights through Education), the first Pan-Asian, undocumented immigrant led organization in the country. You’ll also hear from Sharif from AROC, the Arab Resource and Organizing Center. 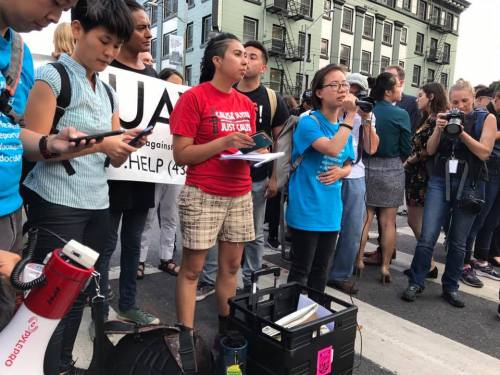 Tonight, we replay a program produced by Making Contact, “Presumed Guilty: American Muslims and Arabs” produced by Andrew Stelzer. Marie B. Choi kills it with an amazing interview with Anh Pham, an anti-war and solidarity activist whose home was raided in September 2010 because of her political activity. And we bring you a commentary from Veena Dubal, staff attorney at the Asian Law Caucus.

Cesar Chavez Day
Today we honor Cesar Chavez day and we remind our listeners that the 1965 Delano Strike, which gave birth to the United Farm Workers, was started by Pilipinos. According to John Delloro, executive director of the Dolores Huerta Labor Institute, as the summer heat of 1965 ripened the grapes of the Delano fields, Pilipino farm workers walked off the job and struck for dignity and better working conditions. Earlier, Cesar Chavez of the mostly Mexican National Farm Workers Association had refused the request of Larry Itliong of the predominantly Pilipino Agricultural Workers Organizing Committee to join the strike. A week after the strike began, Larry approached Cesar again and this time Cesar agreed. We tip our hats to the manongs of Delano and their courage to fight for the rights of agricultural workers.

Rhymes and Rhythms poetry reading
On Saturday, April 2nd at 5 pm, catch the Rhymes and Rhythms multicultural poetry reading hosted by Nancy Hom and Avotcja at the I-hotel Manilatown Center at 868 Kearny Street in San Francisco. This quarterly series features some of the most dynamic poets, storytellers, singers and performers in the Bay Area. This month’s performers include Pete Yamamoto, Oscar Bermeo, Naomi Quiñonez, and others.

Bhopaili the Movie
Next Thursday, April 7th, from 6pm – 9pm, Bhopaili the Movie will be playing in Berkeley followed by a Q&A with Sanjay Verma, a Bhopal survivor who lost seven family members in the 1984 Bhopal Gas Disaster. Sanjay Verma is touring the U.S. to testify against the production of methyl isocyanate in West Virginia. MIC is the gas that leaked in Bhopal, India killing thousands instantly. The event is located at UC Berkeley School of Law, Room 105.

Join Apex Express
Apex is calling on you! Do you want to be part of a dynamic team of reporters, activists, and DJs? Join our crew. We’re also looking for independent Asian American musicians to share your tunes with us. Give us your beats, your demos, your experimentations. Email us at apexexpress@kpfa.org

4/1/10: Day of Remembrance and Resistance Behind Bars

Khurshid Khoja speaks on the injustice of the incarceration of Japanese Americans during World War II and the continued struggle against racist scapegoating. Assemblymember Warren Furutani shares his personal story about the first pilgrimage to Manzanar and talks about the bill he introduced, which passed last year, to award college degrees to Japanese Americans denied diplomas because of their removal to U.S. concentration camps.

Victoria Law, author of Resistance Behind Bars: the Struggles of Incarcerated Women, spent nine years researching this book on the often ignored injustice of women’s incarceration and provides us with examples of their organizing.

Peter Swing will remind us about the upcoming Asian Law Caucus fundraising dinner and Yuri Kochiyama talks about the call of support for political prisoner Mumia Abu Jamal.

2/11/10 US Census, Citizens Redistricting Commission, and Day of Remembrance

This week on Apex Express, Sirch Chanthyasack and Sonny Le join us to discuss the upcoming US Census and why it is critical for APIs to be counted.

Also, Carlo De La Cruz of the Asian Law Caucus talks about the new Citizens Redistricting Commission and the need for API’s to apply by the newly extended deadline of February 16, 2010.

We’ll have an update from Jill Shiraki of Preserving California’s Japantowns about the upcoming Day of Remembrance commemoration taking place Feb 21, 2010. The theme this year is “Dreams Interrupted, Dreams Fulfilled” and it marks 68 years from the date Franklin Roosevelt signed Executive Order 9066.

And, Tia and Frankie Legoski join us to talk about Journey to Motherland a Korean Amerasian unification trip to Korea in collaboration with AmerasianUnityFoundation, HalfKorean.com, and HAAUSA.