Tune in tonight for our monthly South Asian edition of APEX Express. First we bring you a critical discussion with Dalit artivist Thenmozhi Soundararajan from the South Asian Histories for All coalition, on the ongoing California Textbook Campaign; on the struggle to keep ancient Indian history curricula in middle school history textbooks, as- it-happened, and not how a well-funded group of Hindu fundamentalists would like it to be. Then we discuss with Lisa Sangoi, a lawyer with National Advocates for Pregnant Women,  Purvi Patel’s case, where we find out the status quo of a young Indian American woman who was unjustly thrown in jail for 20 years, for having a late term abortion. Produced by: Preeti Mangala Shekar and Justine Lee

The segment ends with a song by hip-hop artist Bambu about Eddy Zheng.

Justine Lee talks to award-winning filmmaker and Bay-Area native Felicia Lowe about her documentary Chinese Couplets. The film is an intimate family story that explores the impact of the Chinese Exclusion Act on one family, over two centuries, in three countries, on four generations of women.

For the entire month of March, the film will be broadcast through Xfinity and on PBS in select markets. For more details, check out ChineseCouplets.com 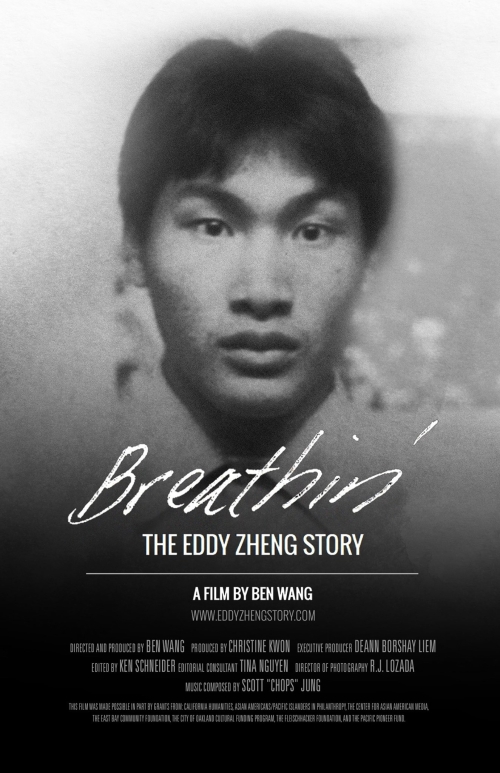 And Alec MacDonald takes us to a gathering of immigration activists to talk about the recently released UCLA student publication “Dreams Deported: Immigrant Youth and Families Resist Deportation.” In addition to describing how this book came into being, speakers Kent Wong, Amy Lin, Steve Li, and Mario de Leon Estrada discussed current challenges facing undocumented immigrants and the urgent need for policy reform in this area.

On Fridays at 8pm March 11, 18 and 25. At the stage werx theater in SF. Join us for the stage show “in the crosshairs” – solo performance powerhouses Martha Rynberg and Thao P. Nguyen join forces to give you “In the Crosshairs,” a two-person sketch comedy show about hair. Yes, hair! http://crosshair.bpt.me/

Saturday, March 12, 2016, 8pm-11pm – In partnership with the Trust Your Struggle Collective and Galería De La Raza, Studio Grand is pleased to present When She Rises, an exhibit dedicated to the resilience of women. The artists will be examining the experience of women in their countries of origin – the Philippines, India, and Japan. That’s at Studio Grand in Oakland from 8pm to 11 pm.

Growing Our Souls, Building Our Soil

This is a little ways off, but we’re trying to create some buzz. On Saturday, March 19 at 10 AM – 3 PM join us for Growing Our Souls, Building Our Soil :: A Day of Vision In Action.A part of the Bay Area Grace Lee Boggs Memorial Celebration Week at  Urban Tilth’s Edible Food Forest @ 16th Street & Ohio Ave, The Richmond Greenway, Richmond, CA

Sun. 3/20 – 12-3 pm, Oakland Asian Cultural Center, 388 9th St, Oakland. In celebration of Grace, we will bring together activists and organizers to share their reflections on Grace’s work, ideas, and current movements/struggles in the Bay Area. We will also be joined by guests from Detroit and the Boggs Center.

1/29/2015 Surveillance, Women and Queerness in the Movement; Fund Drive.


Today is fund drive. But we’ll spend most of our show thinking about the Black Lives Movement, through two different lenses:

First, we talk to Hamid Khan from the Stop LAPD Spying Coalition about surveillance, policing, and their impacts on current activists. How is the LAPD spying on activists? What have we learned about the history of surveillance and who it normally targets? And, what can we do to fight back?

Then, we feature a panel discussion with Wazi Davis and Brianna Gibson from Black Brunch and Ellen Choy from Asians for Black Lives about the effect of women, queers and trans people on organizing culture, specifically as it affects Black Lives Matter. They joined Marie and Salima and Marie’s one year old baby to discuss how their identities have affected their meetings, their actions, their outreach and their views on the legacy left by the Black Civil Rights Movement.

On Saturday 31st from 7 to 10 pm at the Soma Arts Cultural Center join us for “Celebrate Your Body,” a body-positive fashion show put on by Kearny Street Workshop. The event features Asian American designers including a line by Project Runway finalist Kini Zamora!

Next Saturday on February 7th at Frank Ogawa Plaza in Oakland at 11:30 am hundreds are converging for The March for Real Climate Leadership: Our Water, Our Health, Our California. Come out to talk about Climate change and water

And for our Native brothers and sisters there is a separate contingent of Native Hawaiians and Pacific Islanders at the Climate Leadership march. You can find a link for the facebook event on our webpage. 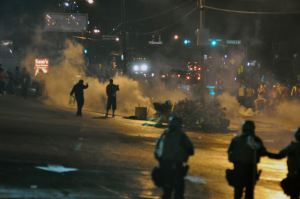 Tonight, in solidarity with the people of Ferguson and the ongoing repression by the police, we dedicate our show to organizing and teaching which attempts to fight back against the rampant killing of young black men and women at the hands of the cops.

First, we hear from Lara Kiswani – a member of the Stop Urban Shield Oakland and Executive Director of the Arab Resource and Organizing Center – over the phone as she talks about the militarization of police right here in Oakland and how they’re planning to stop the Urban Shield Police Conference. You’ll also find out what you can do to help. 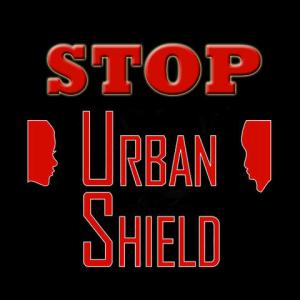 Then, we host a panel discussion with Cayden Mak the New Media Director from 18millionrising.org, Scot Nakagawa from change lab, and Bhavik Lathia Campaign Manager for Rapid Response at Color Of Change, on the importance of Ferguson and police brutality in the Asian and Pacific Islander community – why we should care, what we should do about racism in our own homes and spaces, how our own experiences of police/military intimidation have affected us in our motherlands and here in the US, and how we can form solidarity with our brothers and sisters. 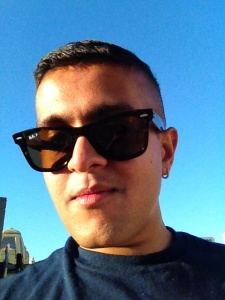 Special thanks to Marie Choi for interview sound and for production help.

Download mp3 by clicking here
Salima Hamarani and Robynn Takayama met with singer/songwriter Thao Nguyen who plays with the Get Down Stay Down while bringing her politics (particularly around prisoner rights) into her song lyrics.

They started the interview with Robynn recalling a friend who talked with Thao at a raucous music festival. With several beers under their belts, he heard a bit of a country twinge. So the APEXers asked her where is she from and what her upbringing was like.

Tonight we talk with two members of Asian Prisoner Support Committee about the dehumanizing conditions in California state prisons including the inhumane solitary confinement units. They also talk about a pattern of inhumane treatment, and raise the issue of the deadly Valley Fever fungus, which is blamed for 62 deaths among California prison inmates statewide, with a majority of them in Avenal and Pleasant Valley, yet inmates are still being moved into these facilities. As our interviewee says, “When faced with adversity, California Department of Corrections and Rehabilitation takes the moral [low] road …because prisoners are the least protected population and they’re able to get away with it.”

Please visit the change.org petition to stop the transfer of inmates to these facilities and for basic human rights for the prisoners at Avenal and Pleasant Valley.

Community Calendar
This Saturday at 6:00 p.m., join Bay Area Philippine Artists at Lumpia and Martinis 2! Held at the Philippine Center Gallery on San Francisco’s Sutter Street, guests can bid on art from over ten local artists, eat unlimited lumpia, and shake it to the rhythms of Kulintronica and DJ Chris from LA. Tickets are $25, and include your first martini. Proceeds benefit the artists. https://www.facebook.com/events/626093670742441/?ref=2

This weekend, join the Diablo Japanese American Club in Concord for their daylong Summer Festival celebrating Japanese culture. The program includes Kendo, Ikenobo, and Judo demonstrations, Taiko and Koto performances, classical and folk dancing, and more! Saturday starts at 1:00 p.m. and Sunday at noon. More information can be found at diablojaclub.com.

On Sunday from 4:00 – 8:00 p.m., embrace your inner otaku at the first ever Anime Night at the Oakland Asian Cultural Center. For only a $5, mingle with fellow anime fans, enjoy tasty snacks, sing karaoke, and enter a prize-contest for the best cosplay! All proceeds benefit the OACC, building programs fostering intergenerational and cross-cultural dialogue for the APIA community. https://www.facebook.com/events/398550796916586/

Monday at 7:00 p.m. at The New Parkway Theater in Oakland is the film screening of The Women Outside. The film, created by J.T. Orinne Takagi and Hye Jung Park, takes us into the lives of South Korean women who work in the brothels, bars, and nightclubs around U.S. Military Bases in South Korea. Raising questions about U.S. military policy, economic survival, and the role of women in geopolitics, The Women Outside will be followed by a panel of local advocates including Gwyn Kirk from the International Women’s Network Against Militarism. Tickets are $6 with all proceeds funding the Alipato Project, providing legal representation to survivors of domestic violence in Alameda County. https://www.facebook.com/events/200968010068608/?notif_t=plan_user_invited

This upcoming Thursday at 7:00 p.m., the Asian Art Museum screens the documentary Mrs. Judo: Be Strong, Be Gentle, Be Beautiful. The first and only woman with a 10th degree black belt in Judo, Keiko Fukuda is one of only four people in the entire world to hold this honor. By request of her teacher and original founder, Kano Jigoro, Fukuda traveled to spread judo, settling in San Francisco’s Noe Valley to teach at the Soko Joshi Judo Club for over 40 years. Fukuda passed away this February at the age of 99, and Thursday’s screening will include a panel discussion, ademonstration of her signature gentle form of Ju-no-kata, and special guests to honor the legacy of this bay area powerhouse pioneer. https://www.facebook.com/events/415710278547456/?ref=2